Summer Speaker Series...
History is made every day.
We have all become a big part of history over the past year.
As we continue to move forward, and look back on where we have been, and what we have done, we can't help but examine procedures and advancements that have origins rooted in the American Civil War.

Nature, which is sometimes overlooked, played a factor in the Battle of Gettysburg, and throughout the Civil War.
Similarly, during the pandemic, it became an intricate part of our health and wellbeing.

There are a lot of interwoven pieces between Heritage, Habitat & Health,
and we will explore these topics during our summer speaker series. 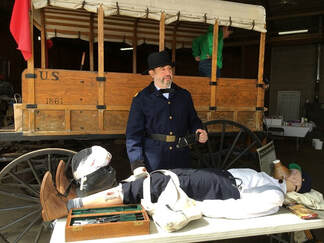 July 31st: Brad Stone
Civil War Armies Medical Advancements: ​Modern Medical Crises
​
​​Brad Stone will describe how the Civil War armies made tremendous medical advances mass casualty evacuation and treatment – advances that continue to save lives on the battlefield and in our everyday lives.  Civil War developments in such medical systems as triage, ambulances, hospitals and hospital ships help us to deal with a wide array of modern medical crises – including the COVID pandemic.

Brad Stone has had a long career with the federal government as a senior public relations executive dealing with a wide variety of public health issues. This experience included leading the public relations operations of the U.S. Food and Drug Administration (FDA) and the U.S. Substance Abuse and Mental Health Services Administration (SAMHSA).  He currently combines his interest in the Civil War and medical history by volunteering as a docent at both the National Museum of Civil War Medicine in Frederick, MD and aboard the USS Constellation in Baltimore Harbor.  He has given presentations on a variety of Civil War topics at a number of institutions including the Gettysburg Heritage Center and the U.S. Navy Museum.​ 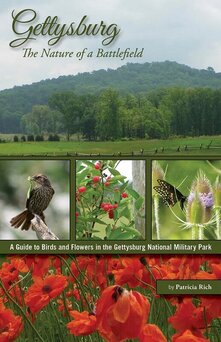 The Gettysburg National Military Park is one of the most visited National Parks in the nation.  Visitors come to tour the battlefield and hear the stories about those three fateful days in July, 1863.  There is another, often overlooked, side the the park.  Due to the many years of preservation of the fields and surrounding areas, the park has evolved into a diverse eco-system.  It is home to many native and introduced species of birds and plants.  Patricia will discuss these natural treasures, and show you a different perspective of the Gettysburg Battlefield.

Patricia Rich was raised in southern Maryland, just down the road from the Surratt House and Tavern in Clinton, Maryland.  Family trips to the Manassas Battlefield, dr. Mudd's Historic Site, Point Lookout, and Gettysburg only fueled her avid interest in history.  Pat developed an interest in photography and began creating the Gettysburg Landscapes Calendar.  Beginning with photos of the surrounding landscape and monuments, she began to take notice of the local flora & fauna, including them in her extensive portfolio.  She has done book signings and presentations at several locations including the Gettysburg Heritage Center. 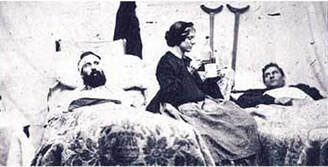 August 21st: Noel Kline
Angels of the Battlefield: The Role of Nurses During The Civil War

​Noel will present an overview of the role nurses played during the Civil War to care for the dying and injured soldier. He will offer a brief review of the diseases and conditions soldiers suffered including how the technology of war changed casualties of war. In addition, he will discuss 19th century Christianity and death with relevance to the Civil War. His presentation will also briefly discuss medication and other treatments of illnesses and wounds. Lastly, he will explain how the Civil War has changed nursing care today.

Noel Kline, MSN, RN has been a nurse for the past 26 years. He has worked in acute care, hospice, and long-term care. For the past 8 years, Noel has been nursing faculty at HACC and Penn State Harrisburg. As nursing faculty, Noel has taught critical care and Med/Surg nursing lecture and clinical experiences as well as created an online course in death and dying at HACC. He has experience teaching 19th Century concepts of death and dying to nursing students, a professional reviewer of thanatology textbooks, and an active volunteer with the American Battlefield Trust and the National Park Service at Gettysburg National Military Park.