What was life like for the people who lived through the Battle of Gettysburg, and the Civil War? Hear first hand the experiences of various civilians and soldiers who found themselves wrapped up in one of the most pivotal events in our nation's history.  The museum will come alive as first-person presenters tell you their story!

Let Me Tell You My Story...

"We knelt, shivering, and prayed. The noise above our heads and from the distance, the rattle of musketry, the screeching of shells, and the unearthly cries, mingled with the sobbing of the children shook our hearts. Three soldiers crept down into the cellar, and we concealed and fed them."
-Salome Sallie Myers 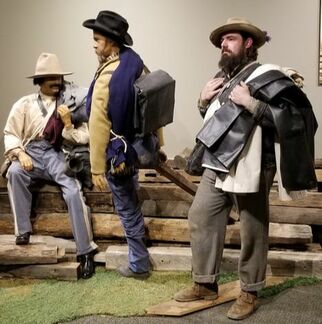 Can you guess which man is real?
The Battle of Gettysburg changed more lives than we could ever imagine.  The events that took place in July of 1863, in a small town many people had never heard of, forever effected our nation's history.  The Gettysburg Heritage Center museum will come to life with first-person accounts of the battle.  You will hear stories such as how the townspeople reacted to the battle raging outside their front door - did they hide? Fight? Run?  How did a woman, who lost her husband & son in battle, and left with nothing, find the strength to continue on? What did it mean for the soldiers who marched into battle, and survived? Or were captured as prisoners of war?

These are the stories of the people who struggled, survived, and rebuilt not only a town, but a country.  Through out the museum, you will hear messages of courage and strength - that through dark there is light.  You will gain a better sense of what life was truly like for them during the war, and how they were ordinary people like us, who had to do extraordinary things!

Purchase Tickets
*Please note: Video & streaming of any part(s), or the program in its entirety is prohibited. ?Still photography is permitted, and encouraged, during the 'Night at the Museum, 1863' program!

We'd love for you tag the Gettysburg Heritage Center in your posts! #GettysburgMuseum